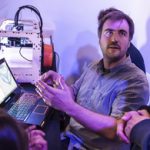 After 4 years of work, Sylvain Lefebvre and his Shapeforge project have obtained a European Research Council grant for the pre-commercialization of the IceSL software. This tool facilitates the modelling of objects for subsequent 3D print-outs.

The “Proof of Concept” grant awarded to the IceSL software by the European Research Council jury will enable the project to go into its pre-commercialization phase. This funding will be used to facilitate the product’s technology transfer to industry and Sylvain Lefebvre plans to recruit an engineer who will carry out case studies with industrial manufacturers.

“This software currently used in our research context and now our aim is to make it workable and functional in different economic sectors.”

The European Research Council acknowledged that IceSL – a software programme which facilitates the modelling of objects for subsequent 3D print-outs – provides innovations of interest for business and industry. “It has many advantages” explains Sylvain Lefebvre. “Technically it uses a very different approach from existing products. We can model very complex objects without needing to use too large a quantity of data.” He is already considering transfers to the medical field, particularly for modelling prostheses, but also applications in mechanical spheres like car manufacturing or aeronautics, and in design.

“The engineer we would like to recruit will help us complete our work on the software and identify its limitations in partnership with industry. This will give us a very accurate plan to subsequently solve any problems,” adds Sylvain Lefebvre. The ERC grant will also be used to settle legal and commercial issues linked to the technology transfer.