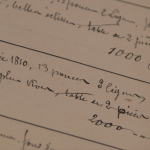 Pierrick Gaudry, CNRS researcher in the Caramba team has broken the codes in the accounting registers of major Parisian instrument makers from the 19th century. This deciphering reveals the value of string instruments and provides more knowledge of the history of the instrument-making business.

Jean-Philippe Echard, the curator of the music museum in Paris, found three accounting registers covering a period of nearly 150 years in some archives. These had been kept by the various successors of the great Parisian string instrument maker Nicolas Lupot who founded his workshop in 1795.

These accounts have become yellowed by time but have references to nearly 250 instruments. These were mainly violins bought by the instrument makers with a view to selling them on to their clientele of musicians.

For each instrument, 4 prices were entered – the violin’s purchase price, the desired selling price, the reserve price (the minimum price the instrument maker would accept) and the actual sale price.

The instrument makers coded the purchase price and the reserve price to keep them confidential by replacing numbers with letters. The coding enabled the instrument maker to have the book open in front of clients without the latter knowing his profit margins.

Jean-Philippe Echard therefore contacted Pierrick to ask him to decipher these codes. “In that era, communications were multiplying and coding messages had become fashionable”, explains Pierrick.

Pierrick usually uses powerful calculators for his research but in this case to decipher the codes he just needed a sheet of paper and a pencil. It turned out to be a monoalphabetic substitution cipher. The instrument maker replaced a figure by a letter basing this on a ten-letter word. After trying out a few hypotheses, Pierrick discovered that this code was based on the French word “harmonieux” (harmonious), with the “h” standing for 1 and the “x” for 0 (this was sometimes replaced by “z” as the figure 0 was often used).

Why was the word “harmonieux” chosen? The soundboard – ‘table d’harmonie‘ in French – is the front surface of a violin or any string instrument. It receives the vibration to be amplified, usually via the bridge of the instrument.

Following this discovery, an article was submitted to and accepted by the journal “Cryptologia” which features the historical aspects of cryptography.

This deciphering work revealed numerous secrets about the value of string instruments and more generally on the history of the instrument-making business but also showed that cryptography is not just based on working with computers. It existed long before computers in fact and even involves many other disciplines. The main thing is to make them work together in harmony.

The article can be read on Hal