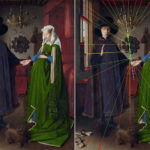 In art history, it is commonly accepted that the Flemish painter Jan Van Eyck knew nothing of the laws of perspective. Gilles Simon, lecturer at the University of Lorraine and researcher at the LORIA computer science laboratory (CNRS, Inria, University of Lorraine), carried out a probabilistic analysis of five paintings of the artist between 1432 and 1439 and revealed that the painter was in fact far ahead of his time thanks to computer vision methods. He used an advanced perspective machine with two degrees of freedom to represent space as closely as possible to human vision. This surprising discovery solves a major enigma of art history and means Jan Van Eyck is the pioneer of techniques such as augmented reality or synthetic holography.

Perspective: a history of depth

Perspective is the technique that enables objects to be represented in three dimensions on a flat surface by giving them an effect of depth. During the Renaissance, linear perspective revolutionised Italian painting, notably with Giotto and the notions of convergence points and the horizon line. In 1425, the architect Filippo Brunelleschi invented the first augmented reality device called Tavoletta, a wooden panel with an eyepiece. Finally, Leon Battista Alberti confirmed these notions in 1436 in his treatise De Pictura, in which he evoked orthogonals meeting at a single point. The Italian painters were thus considered to be a step ahead of their Flemish counterparts.

Jan Van Eyck left his mark on art history with his meticulousness and his technique of oil painting of which he was a precursor. His science of detail and his desire to immerse observers in the scenery made him one of the great masters of the Renaissance. Nonetheless, the question of perspective in Jan Van Eyck’s paintings has been hotly debated by art historians for a hundred years. According to the specialist in Flemish primitive painters Erwin Panofsky, the artist used perspective empirically and did not know its laws. Gilles Simon, a researcher specialising in augmented reality, was intrigued by a seemingly particularly elaborate perspective when admiring the Ghent Altarpiece. He therefore decided to study the painter’s paintings closer with an approach at the crossroads of art history, geometry and probability, particularly the Arnolfini Portrait.

The researcher thus analysed the vanishing points. To corroborate his intuition, Gilles Simon wanted to provide an objective point of view thanks to mathematical tools. “The a-contrario model is usually used to detect vanishing points in a photograph and is a key computer vision technique. I adapted it to the specificities of painting and paired it with a probabilistic consistency criterion,” explained Gilles Simon. His results showed four centric points regularly distributed along an inclined axis and a fishbone pattern, common to all five paintings, which thus refutes the idea of chance in the paintings’ construction.

A 3D reconstruction of the painting enabled the researcher to deduce the way Van Eyck painted (strip by strip, through a glass or a mirror), and his position (sitting, then standing). “It seems the painter also wanted to take human stereoscopic vision into account in his paintings,” added Gilles Simon. These results show that the painter invented natural polyscopic perspective with an optical device comprising four eyelets, to represent the scene from different points of view while introducing the least perspective distortion possible.

These analyses thus prove that Jan Van Eyck had created a revolutionary polyscopic perspective machine at the same time as the Italians invented monoscopic artificial perspective and 70 years before Leonardo da Vinci discovered a simplified version of the process. This discovery thus refutes all the theories established for 100 years about Jan Van Eyck’s perspectival system and opens up new perspectives in art history.

A paper presented at the international conference SIGGRAPH 2021

Gilles Simon’s scientific paper, Jan van Eyck’s perspectival system elucidated through computer vision, has been selected to be presented at SIGGRAPH 2021, the leading international conference on computer graphics and interactive techniques, held from August 9th to 13th 2021.
https://s2021.siggraph.org
The paper is available via this link: https://hal.univ-lorraine.fr/hal-03287031
DOI: 10.1145/3465623