Guillaume Coiffier qualified for the regional final of MT180 2022 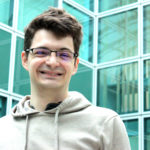 For Guillaume Coiffier, a 2nd year Ph.D. student in the Loria’s Team Pixel (CNRS, Inria, University of Lorraine), his duty as a scientist is not only to conduct his research. Enthused by scientific communication, he takes every opportunity to share his passion with the general public… And this time, the opportunity came in the form of the well-known contest: Ma Thèses en 180 seconds (My Thesis in 180 seconds, in French)

A science lover since he was young, his interests have gradually led him to his current path. “At first, I wanted to become an astrophysicist, but little by little, I became interested in computer science, artificial intelligence, and then finally in computational graphics.

In addition to his research work, he is a volunteer in the scientific communication project “1 scientist – 1 class: Chiche!“. And when younger, he also took theater classes, especially in improvisation. With these experiences in his pocket and the taste for sharing, participating in MT180 appeared to him obvious. “I love to tell and share what I do with people. I think science communication has an important rôle for society and is also very rewarding: it makes it easier when trying to explain your research to your aunt at Christmas dinner!“.

After a preparation phase, he got selected among the 11 finalists from the University of Lorraine. Like all of them, he will present his research topic in only three minutes during the regional competition in Metz… By the way, what is he going to talk about? Without wanting to reveal too much about his presentation, he gives us a little hint: “I’m into flattening objects“.